The Kikoy infinity scarf is a double layered closed loop scarf. Both layers of this infinity scarf are made from Swahili Kikoy fabric. The Swahili Kikoy is a traditional handmade, multicolored fabric made from pure cotton. It is Commonly worn in East Africa and is popular for its bright colors and durability. 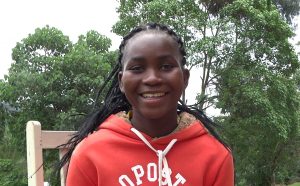 Halima is a 24 year old lady who joined our program in 2016. She was born and raised in Cheptuya. She lost both parents at a young age and was taken in by foster parents. She attended school but was forced to drop out while in class 8 when she got pregnant. she gave birth to a boy and was later forced to move to her in laws place after her foster parents stopped supporting her. through our Field officer in Mnagei ward, she was identified and later joined our program in 2016. She is a hard working lady and within two years she had completed her training and was earning commission from sewing various items at our center. Through sewing and earning commission, Halima managed to raise enough capital to purchase a sewing machine. our program has transformed her from the shy and naive girl to a strong lady who earns money to meet her needs and that of her son who is still staying with his grandparents. Although Halima has her own sewing machine, she is yet to start her own business and thus she is still producing items at Jitokeze for a commission.

Other Products Made by Halima

There are no reviews yet.

Only logged in customers who have purchased this product may leave a review.